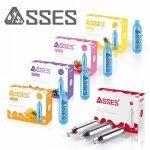 Whenever you want to prepare creamy and delicious sweets but don’t have much time, simple whipped cream desserts appear to be the best solution. Simple dessert recipes not only save you time but also demand little work. Furthermore, there is nothing better than sitting near each other after a long day at work and enjoying a healthy handmade dessert while discussing daily experiences. Take a peek below for the greatest quick dessert recipes that include cream as the main ingredient.

Step one: With a fork, pierce each sweet potato many times. Wrap the potatoes in foil and lay them on a baking pan. Cook for 50-75 minutes at 400 degrees.

Step two: Allow cooling before removing the sweet potatoes from the foil. Scoop out and mash the potato flesh.

Step four: Lightly beat eggs in a small bowl. Next, thoroughly combine the beaten eggs with the pie filling.

Step five: Fill the pie shell halfway with ingredients and bake for 15 minutes at 425°F. Reduce the heat to 350°F and bake for 35-45 minutes, or until the pie is set and a knife inserted into the centre comes out clean.

Step six:  Set aside for 2 hours to cool.

Step seven: To create maple whipped cream, combine all of the ingredients in a large chilled mixing bowl and whisk on high speed until the cream thickens and becomes somewhat stiff. For the cream, combine the maple syrup, sugar, vanilla essence, and cinnamon.

Slice the pie and serve it with maple whipped cream.

Crush the Oreos finely with a food processor (or a zip-top bag and a rolling pin).

Pour the cookie crumbs and melted butter into a medium mixing bowl. Stir until everything is well combined.

Fill a 13×9 baking dish halfway with crumbs and press evenly with a spatula (or the bottom of a measuring cup).

Add the cream cheese to a medium mixing bowl and whisk with a hand mixer until frothy.

Mix in the 2 tablespoons of milk and the sugar well.

Fold the contents of one of the 8 ounce Cool Whip cartons into the cream cheese mixture using a rubber spatula.

Refrigerate the cream cheese mixture for about 10 minutes after spreading it over the cookie shell.

While it’s setting, combine the pudding mixes and 2 3/4 cup milk in a big mixing basin and whip on medium until it thickens.

Cover the cream cheese layer with the pudding mixture. Return to the fridge for another 10 minutes to set.

Spread the remaining 8 oz of Cool Whip over the top then sprinkle with small chocolate chips after it’s set.

Before slicing, cover with plastic wrap and chill for at least 4 hours in the fridge or 1 hour in the freezer.

Why choose a whipped cream charger?

The recipes listed above call for a lot of whipped cream. Making it the conventional manner may be time-consuming and stressful. This is when a whipped cream charger might come in handy. The basic structure of a whipped cream charger is a steel cartridge or cylinder filled with nitrous oxide gas (N2O). It’s used in whipped cream dispensers as a whipping agent. Whipped Cream Chargers are most commonly used to make high-quality whipped cream for hot drinks and dessert toppings. It can also be used to texturize certain components of sweet and savoury foods.

SSESGAS has a large selection of high-quality whipped cream charges available. Their chargers are not only incredibly dependable but they also have a speedy delivery option, making their services stand out from the crowd.

Even since the SSES cream charger was launched, with its excellent quality and affordable price, it …

Description: SSESGAS is one such provider of high-end whipped cream chargers. We make it their …

Using nitrous oxide chargers and cream whippers may appear intimidating at first, but once you under…